skip to main | skip to sidebar

WHO and LEFT Conspiracy? 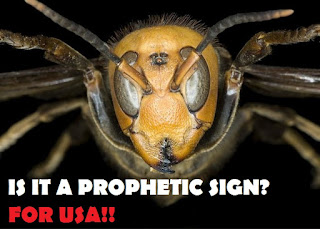 Is the Asian Hornets a sign from God that are attacking the bees in USA.
Does it point to anything spiritual that is happening in the spiritual realm?
What does a bee symbolize in Christianity?
In Christianity, the bee has historically been seen as a symbol of Jesus Christ's attributes. The honey reflecting his sweet and gentle character, whilst the sting pertaining to justice and the cross.
So we know that when the communist ASIATIC CHINA which is like a MURDEROUS HORNET flew in to Unites States Of America with the COVID-19, the BEES were the TARGET GROUP. The followers of CHRIST who are the BEES who stand up for what is RIGHT. Do they call them RIGHT-WINGERS? OR BIBLE THUMPERS OR TRUMPERS.
RISE UP AND KNOW THE STARTEGY OF THE ENEMY FROM WITHIN.
■ DEUT 7:20
...The Lord your God will send the HORNET AGAINST them, until THOSE WHO are LEFT and HIDE THEMSELVES FROM YOU PERISH.
WHAT???? THOSE ??? WHO (World Health Organisation) and ...LEFT??? Is it democrats who are left?
What are they doing?
Are they hiding a conspiracy from you people?
Infact they will perish who are involved in a CONSPIRACY.
THE LORD IS SAYING THAT THE ONES WHO ARE CONSPIRING WILL BE JUDGED BY THE VERY HORNET SOON.
The big huge trap that they laid, they who did it will get caught. Even though many of these LEFTISTS HIDE THEMSELVES FROM THE TRUE BELEIVERS THROUGH BEING CO-CONSPIRATORS WITH WHO (World Health Organisation), they will PERISH FROM THE BEES who are TRUE BELIEVERS who have and hold the NATURE OF CHRIST WITHIN.
God bless all!
www.apostolicrevelation.info

Posted by Abraham Israel I at 5:38 AM

Email ThisBlogThis!Share to TwitterShare to FacebookShare to Pinterest
Labels: Prophecy

Prophetic Word for the Year 2009 and Ahead

Apostolic Articles for Kingdom Living is birthed from the vision of a true apostolic church that God has given Abraham Israel to establish, called Household of Faith Church and World Outreach. This group will focus mainly on apostolic teaching that will empower and equip the saints to reach their full potential in Christ Jesus. Our vision statement is to: Bless the city, Reach the nation, Arise and shine to the nations! Our goal is the edification, evangelism and empowerment of the last day Church the Lord Jesus Christ is raising up, before His triumphant return! Please feel free to email Abraham if you have any questions or comments! Also, please email with any prayer request you may have to,

Delving in to the Prophetic